Well, here it is. New metal and rubber on all four corners. I'm very pleased with the results!

I have to repaint the wooden door moldings back to black so it looks better.

And from the side:

After running on several twisty roads, I can definitely say that tires are no longer my bottleneck. Now, it will have to be the suspension. These tires grip so well that the body roll is becoming unbearable, so I will have to start finding a solution for that sooner or later.

And then later on, this happened. She's always had an idling issue where the rpms just drop very low (engine doesn't want to stutter and die though), but it hasn't reached and maintained 350 rpm before... At least if I hit the AC button, it'll jump back up!

I also got new floor mats to replace the aging (and missing) carpet currently in there. No pictures, I forgot...
Next up on the to-do list will be headlights. They should hopefully be in this weekend.
Posted by Pawin Jiaravanon at 10:46 PM 1 comment:

I originally wanted white rims, but the specific rims had sadly been discontinued by Enkei.

My friend originally owned these tires, but they rubbed against the wheel wells of his car. There was plenty of tread left however, so I took them.

I'll be trying them out in a couple of hours!


PS. Blogspot has changed. I don't like it.
Posted by Pawin Jiaravanon at 11:47 AM 2 comments:

Hey guys! It's been a while. 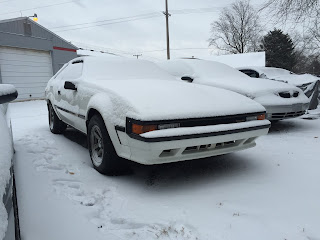 She was in covered storage, but had to be parked outside to wait for servicing.

Shan has been waiting for a while, and every day I long to take her out more. Hopefully the wait shouldn't be too much longer!
She's currently in the shop getting general maintenance taken care of. Oh, and the rear brakes were shot apparently, so that's being replaced.

So, a quick update of what's been happening.

I bought a custom turbo exhaust manifold from a person on the MkII Celica Supra Facebook page. You can expect that to be put into use in the next couple of years. 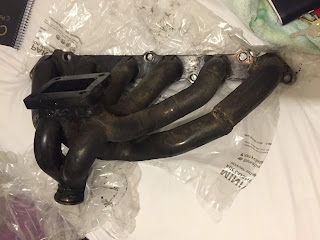 Custom manifold. I wonder how this will hold up.

I got a rear wiper motor off of EBay. Hopefully that'll make the rear wiper functional again. 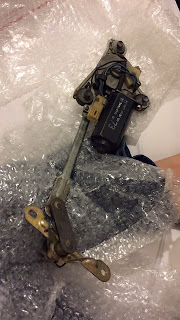 I got Hella Vision Plus headlights from Summit Racing. I will drop those in very soon. 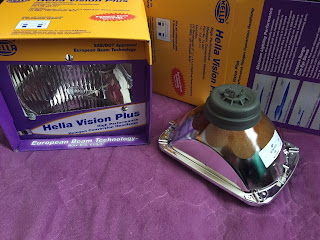 I'm assuming anything will be better than the stock headlights.

I am highly considering getting white Enkei Compes in 16x8 with 0mm offset. My friend has a spare set of Toyo RA1's in 225/50/r16, which has almost the same diameter as the stock tires. 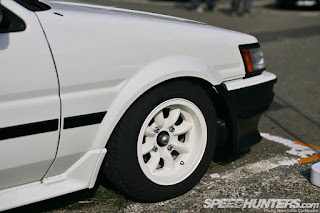 Imagine this, but on a Supra instead.

Shan will be back and running very soon!
Posted by Pawin Jiaravanon at 1:46 PM No comments:

So, the snow touched down on Saturday morning. 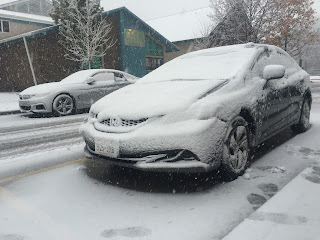 It looked pretty, but then got lame real fast.

I knew it wouldn't be optimal to drive Shan around in the snow/ice, but I wasn't ready for how bad it would be.
Had I even revved the engine a bit past idle, my rear end would slip. Motorized wheelchairs could probably beat me in a race.
But that doesn't express how fun the snow is. 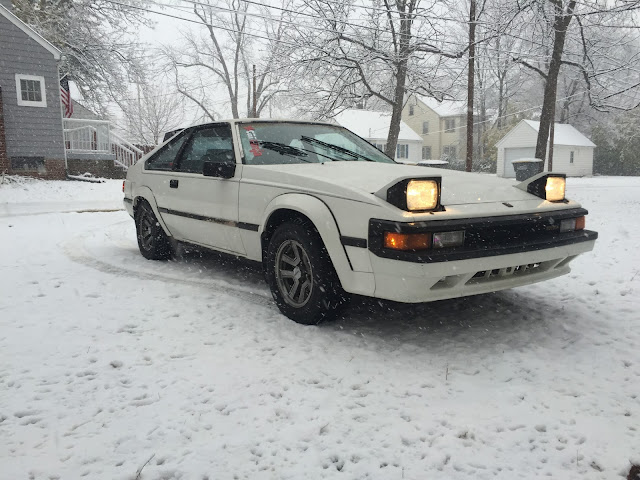 I had about half an inch of tread left in the rears. Mix that with my lack of any driver assists, and you can easily see why it was so hard to control.
For that very reason, I was doing "burnouts" and "drifting" all around the neighborhood, without much difficulty! ...while near idle in 2nd. It was fun, But it's definitely not practical. Nor is it useful or safe when I'm actually going places. 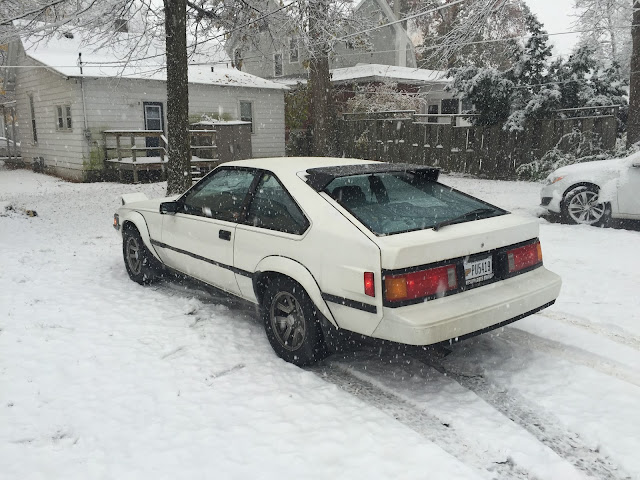 Showcasing my door molding replacement. Shout out to electrical tape.

Shan's most likely going to be staying inside for the rest of the season. They salt the roads regularly here, and with how her underside is looking already, I really don't want to add another element of corrosion. 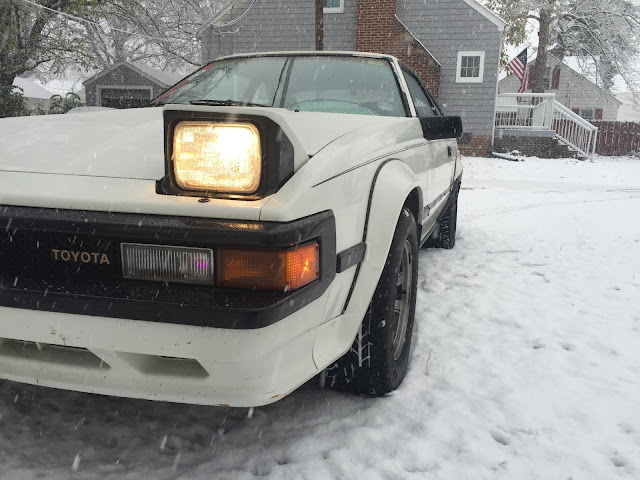 It was fun maintaining this blog. Thanks a lot for tuning in! I'll be sure to keep updating this blog as things move along. This isn't the end; just a short break.

Until next time!
Posted by Pawin Jiaravanon at 4:27 PM No comments:

Quick Update On My Ticket

Just wanted to say that I have finally paid my ticket. Turns out "Failure to register" counts only as an infraction, which I guess is good.

Also, today marks the one-month anniversary of my ownership of Shan!!

Exciting stuff.
Posted by Pawin Jiaravanon at 1:18 PM No comments: 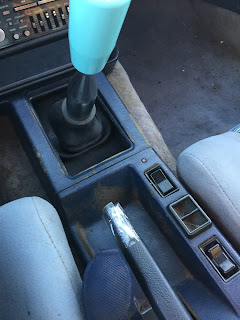 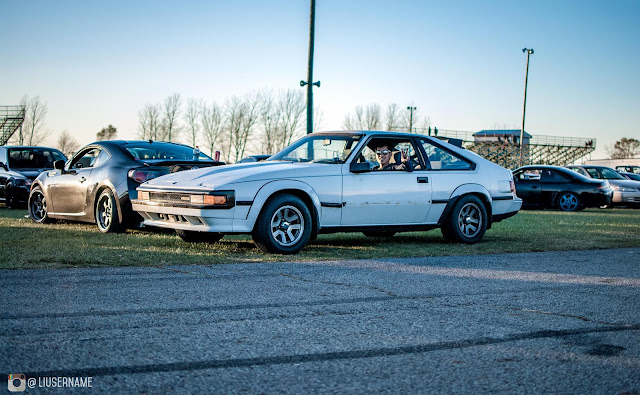 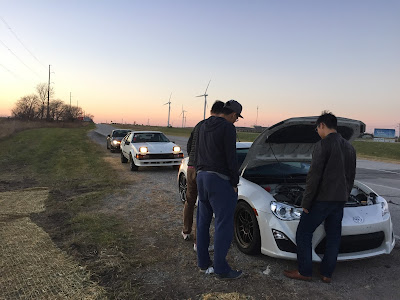 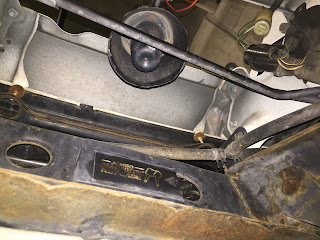 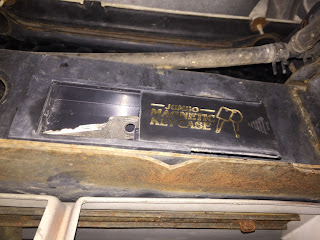 Please don't steal my car.
Posted by Pawin Jiaravanon at 8:18 PM No comments:

Yesterday, I tried jacking my car up to swap the front and rear wheels (more tread on back = more slidey fun). Things went pretty well: we were able to get seized lug nuts off, and we found the front jacking points. Aaand that about concludes the list of good things that happened.

Onto the exciting business!

My friend told me to rest the jackstands on the pinch welds on the side of the car. That didn't turn out so well. There was a loud BANG and the whole thing buckled. 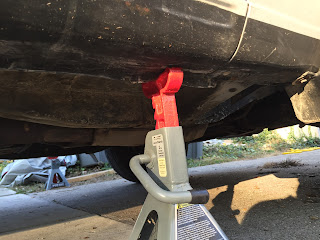 That metal part should be straight. It is not. 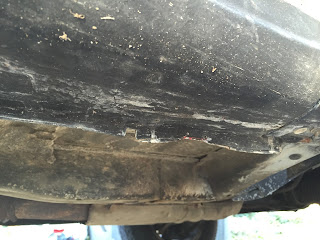 This happened. Wait, that exhaust... 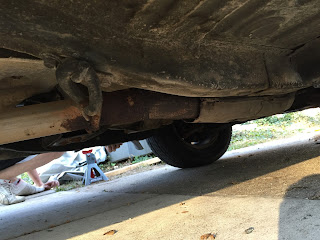 Is that exhaust even connected? Or am I actually straight piped?!

Dear other Supra owners, if you want to jack up your cars, please use the frame itself. The frame is very visibly fine in the first photo. Don't use the pinch welds on a 30+ year old car.

If only I had contacted the Facebook engineers earlier.
Posted by Pawin Jiaravanon at 6:56 AM No comments: