My transmission is absolutely wonderful. I swapped the bushings, removed the leather boot to expose the glorious accordion shift boot, and changed the shift knob to a friend's spare teal one and now it looks fantastic.

A common problem with the W58 transmission from Toyota (that I've read) is that the bushings looove to go bad. This equates to a whole lot of play which, while still driveable, is very annoying.

I went to a website called https://w58bushings.wordpress.com and bought a set for 40 bucks from there. I bought it on Friday and it arrived the following Monday. I was genuinely surprised by the speed of the delivery.

I took the car to my friend Rahul's house (he drives a Honda Prelude) and we got to work. Due to some poor designing, we had to tear out everything along the center of the car in order to reach the shifter. That spanned all the way from the climate control unit to the center compartment behind the handbrake. 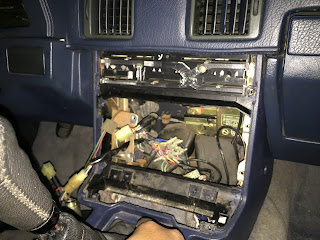 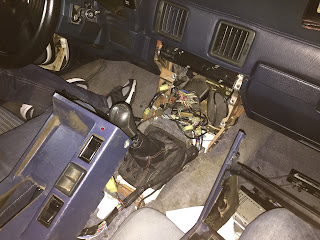 Everything had to be uprooted. 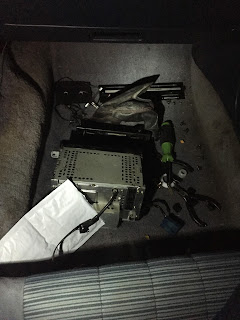 All the parts came out. 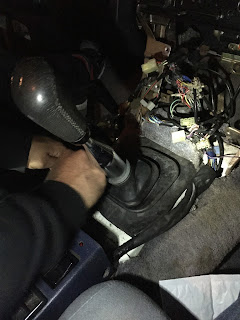 The old shift knob and the exposed shift stick.

Once that was all out, we removed the 8 screws that held in the shifter and saw what we were working with. 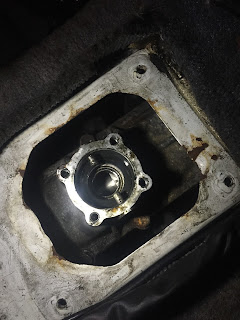 My workspace for the next couple of hours.

Getting the bushings out was near impossible. You had to shove a flathead into there to get at the inner metal ring and then pry it off with the might of Thor. After that, the rubber ring had to come off too. More chiseling had to be done in a space about the size of your expanded poop chute. It sounds straightforward (which it is), but it really wasn't as easy as it sounds. That alone took probably two hours. 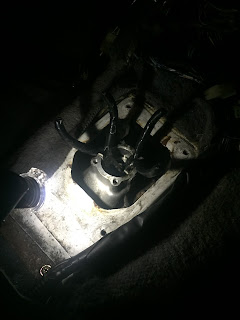 Feels like an open heart surgery. It's messy and cramped, but extremely vital. 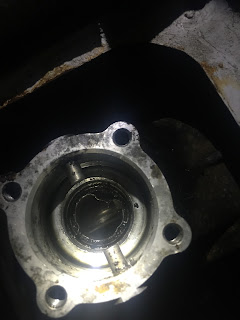 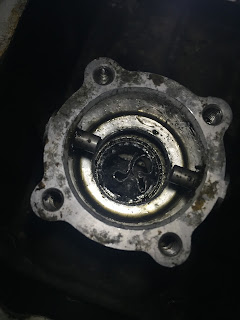 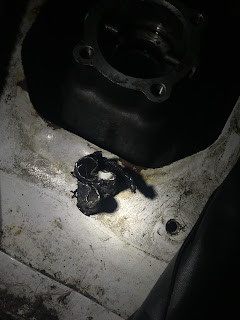 Finally, what's left of the ring is out. Odin would be proud. 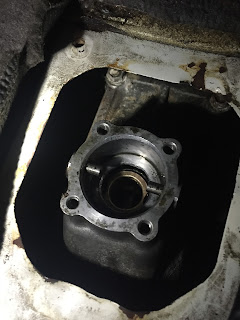 The bronze bushing sits in place.

I felt like a champion when I finally wrestled the bits out. The devilspawn of a bushing was finally evicted from its residence in my transmission tunnel! I epoxied the new bronze bushing into the open hole, fitted the marlin crawler bushings in place, and waited for 30 minutes* for the epoxy to set (*there was no real measure of time, just the lack of patience). The large ring bushing took a bit of sanding down and some good leverage in order to get in there. I could've sanded it in a bit better, but it's not going to go anywhere any time soon. 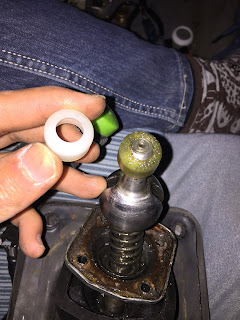 And now, the reassembly process. The radio was a real pain. A couple of holes were incredibly hard to reach so I kept dropping screws back there, and every time a screw fell, the radio would come out again for the recovery of said screw and then go back in, starting from scratch.
Finally, all of the screws were sitting nicely in there, and then I realized; the cigarette lighter socket wasn't plugged in! So out goes the radio AGAIN, rinse and repeat.

I could be a professional head unit swapper at this point. 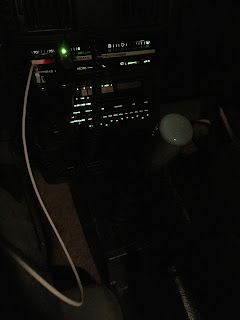 Everything back to before.

After everything was back in and seated however, a wave of joy just swarmed over me. Everything sat back where it belonged and all the electronics still worked. The site didn't lie about the bushings. The difference between the old and new bushings was like night and day. All the play that used to be there was mostly gone. The transmission felt very tight and well-put together. It was a seven-hour process from start to finish, and it was well worth it. Now I just have to wait a whole 24 hours for the epoxy to fully set before I can take Shan for a test drive.
I'm so excited!! 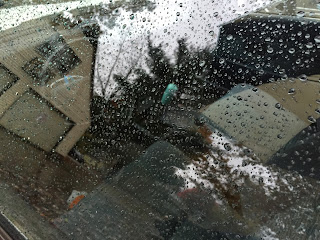 Better pictures of the interior will come as soon as the sun rises upon tomorrow.

Sidenote: I wasn't even sure if the car had a W58 transmission. The previous owner claimed that the transmission, clutch, and battery were swapped out recently, so I took a large gamble in doing all of this. Looks like my gamble paid off.
Posted by Pawin Jiaravanon at 5:47 PM